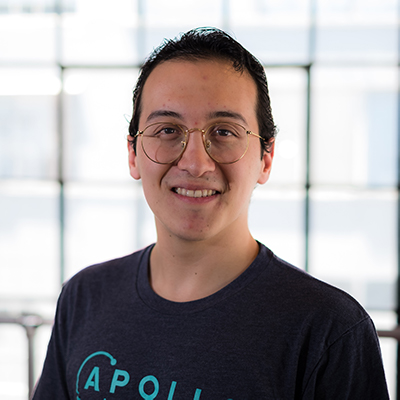 This summer was Felipe’s first time building consumer products, and he worked across both front-end and back-end, contributing new services into Apollo’s infrastructure and building UI to support core experiences within Apollo Graph Manager. Felipe was surprised to learn how much he enjoyed building front-end components and the challenges that come with thinking through user experience. Throughout Felipe’s time, he worked hand-in-hand with multiple members of the team, ranging from UX designers to core systems architects. His work ranged from creating a cron job to ensure user API keys were up-to-date and accessible to building a user management UI for customers to manage their organizations.

My best friend’s parents signed us up for an electronics workshop in middle school. It got shutdown a couple years later because it wasn’t profitable back in Colombia. We worked with wood and other simple electronics and it was hard to find all the equipment and material so we ended up looking for something different related to technology. So we started programming! We both went to summer camps and we came back and found an undergraduate local university that taught programming. We met with the instructors of the class a couple times a week and I remember us working on really simple apps like a small java application that was a catalogue for cars. You could add and remove cards, you know, simple things like that. * I knew I wanted to go to a good school in computer science and there weren’t that many in Colombia who offered that. So I knew I wanted to go to one of the best computer science colleges in America and I ended up getting into MIT and was really happy with that.

I never worked with Apollo before so I didn’t really know what you guys did. I was at the career fair and I heard from Chris about Apollo and visited you guys at the booth. I ended up really enjoying the conversations I had and ended up applying. What made me really serious about coming here was visiting the office and meeting everyone and seeing how people work together. I was very drawn to that! It seemed like the right size company and the right work and the right projects and the right people and that’s why I decided to join Apollo.

I hadn’t really worked on visible commercial projects before this winter. It was really interesting to see because once you do something and deploy it its in the hands of the consumers! In the previous year i was working on things that was internal for developers. The two things that stand out are

Towards the beginning of the summer I was having trouble understanding how the whole system worked. I was working on the accounts side and I didn’t know how different pieces of the code base interacted with each other and how the graph manager worked. That initially made me a bit frustrated because sometimes I didn’t know how to approach some of the problems that I was given and where to start. The best way I overcame this was by asking for help! I asked other members of the team to sit with me and draw out a sketch of the system and the whole codebase and break it up in a way that was easily digestible so that I could really understand the piece that I was working on in detail and how that little piece interacted with the rest of the graph manager.

I don’t want to say surprised but I thought people were super helpful and collaborative. And for the most part if people were busy they were completely open to answering questions at any point of the day. Especially if I was blocked people would reach out to help me. The willingness to help other people out, especially those barely starting out, was super nice!

I would tell interns to really reach out for help and not be embarrassed about “small” questions. If you’re blocked its best to ask for help in 5 minutes then stay stuck for 30! I think its especially true when you’re at a company that’s half remote! They wont really see you struggling so if you communicate that clearly, people will help you. Definitely use the tools like slack to communicate!

Being in San Francisco is really fun and people should go out and do as many things as they can!