After you create a cloud supergraph, you can view and manage its router's configuration from Apollo Studio. Go to the Settings page for your variant in Studio, then click the Cloud Routing tab: 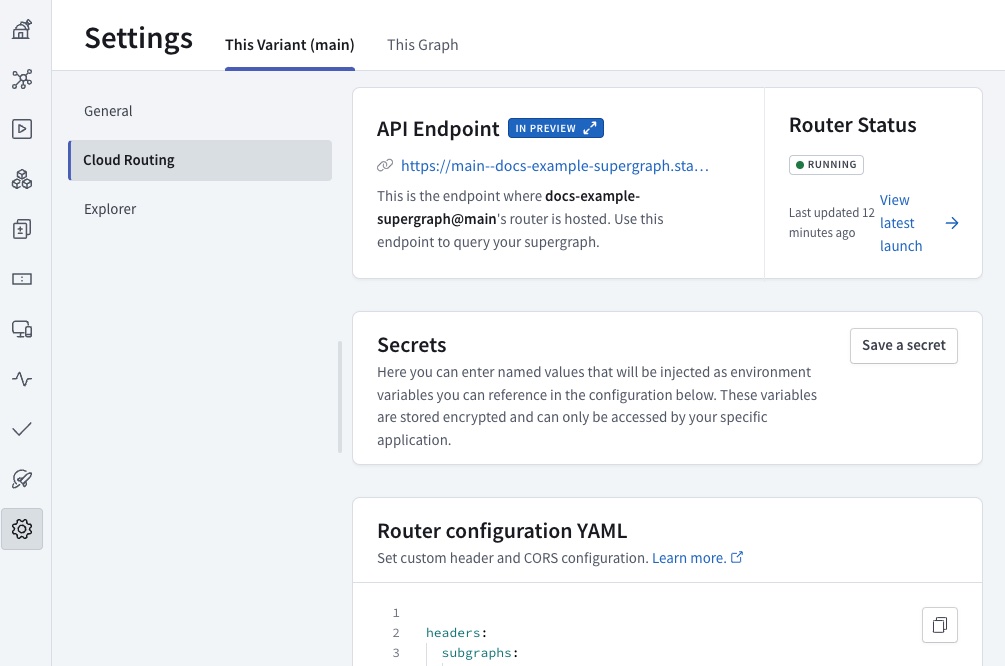 This page shows the following information:

⚠️ GraphOS does not currently support deleting router secrets. We plan to release support for this soon!

You can store secret string values that you can then use in your router's YAML configuration. For example, you might store an authorization token that the router needs to include in each of its request to a subgraph.

To add a new secret, click Save a secret. The following dialog appears: 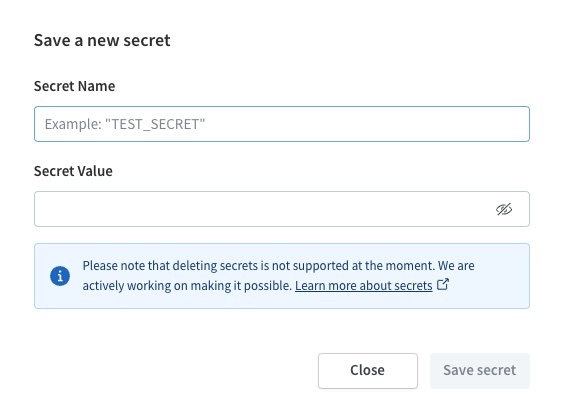 Enter a name and value for your secret. You can't view a secret's value after you save it, so make sure that the value is correct before saving. When you're ready, click Save secret.

Your secret is encrypted and stored. You can then use the secret's value in your router's YAML configuration.

The following example YAML configuration uses the value of a secret named MY_SECRET:

You can configure certain aspects of your router's behavior in the Router configuration YAML section of the Cloud Routing tab. Specifically, you can configure:

If you require more advanced router customization, please reach out about an Apollo Enterprise plan.

Enterprise organizations run self-managed instances of the Apollo Router in their own infrastructure, enabling them to maximize router performance and fully customize its behavior.

You can configure which HTTP headers your router includes in its requests to each of your subgraphs. You can define per-subgraph header rules, along with rules that apply to all subgraphs.

You define header rules in your Router configuration YAML, like so:

Enables you to selectively pass along headers that were included in the client's request to the router.

You can specify which headers to propagate based on a matching regex pattern:

Note: The router never propagates so-called hop-by-hop headers (such as Content-Length) when propagating by pattern.

Alternatively, you can provide a static string via the named option. These named configurations have additional flexibility, because they support the following options:

Enables you to selectively remove headers that were included in the client's request to the router. Like propagate, this option can match either a static string or a regular expression.

Enables you to add custom headers to requests going to a specific subgraph. These headers are always static strings that originate in the router, instead of originating in the client.

Header rules are applied in the same order they're declared, and later rules can override the effects of earlier rules. Consider this example:

To correctly remove a header from the propagation list, make sure to define your remove rule after any propagate rules:

With this ordering, first all headers are added to the propagation list, then the test header is removed.

For a more general introduction to CORS and common considerations, see the following sections:

By default, the router enables only Apollo Studio to initiate browser connections to it. If your supergraph serves data to other browser-based applications, you need to do one of the following in the cors section of your Router configuration YAML:

The following snippet includes an example of each option (use either allow_any_origin, or origins + match_origins):

You can also disable CORS entirely by setting origins to an empty list:

If your router requires requests to include a user's credentials (e.g., via cookies), you need to modify your CORS configuration to tell the browser those credentials are allowed.

You can enable credentials with CORS by setting the Access-Control-Allow-Credentials HTTP header to true.

Your router must specify individual origins to support credentialed requests. If your router enables allow_any_origin, your browser will refuse to send credentials.

For examples of sending cookies and authorization headers from Apollo Client, see Authentication.

The following snippet shows all CORS configuration defaults for your router: