GraphQL Summit is back for three days of insights, hands-on learning, and fun to celebrate the GraphQL community. Join us in San Diego Oct 3-5.

Apollo Studio can ingest operation metrics from your GraphQL server to provide performance metrics for your graph: 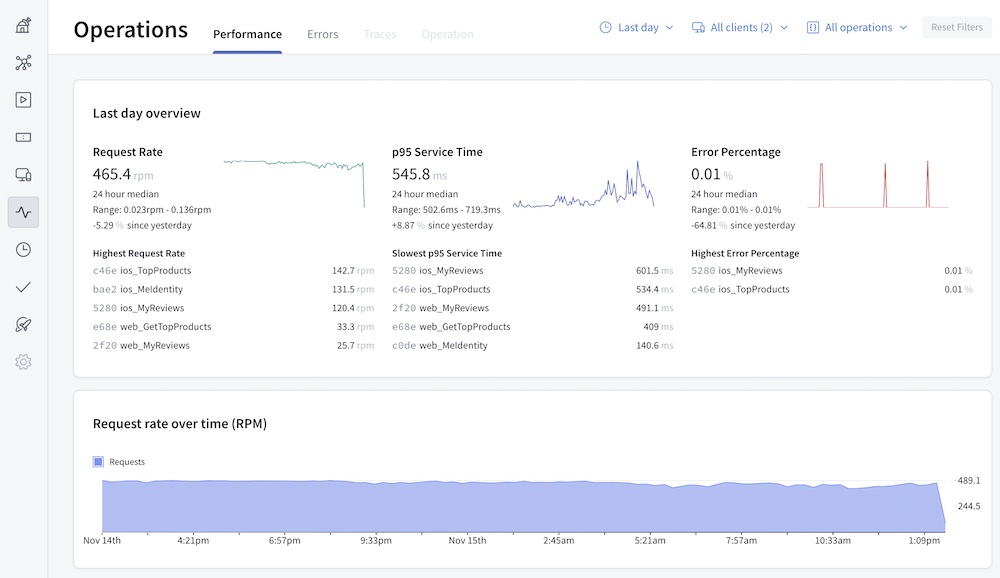 Included in these metrics are traces. A trace corresponds to the execution of a single GraphQL operation, including a breakdown of the timing and error information for each field that's resolved as part of the operation.

Trace reporting enables you to visualize:

Apollo Server has built-in support for pushing metrics to Apollo Studio. To set it up, you provide it a graph API key from Studio.

API keys are secret credentials. Never share them outside your organization or commit them to version control. Delete and replace API keys that you believe are compromised.

After you obtain a graph API key, assign it to the APOLLO_KEY environment variable (ENGINE_API_KEY prior to version 2.13.0 of Apollo Server) in your production server's environment.

Consult your production environment's documentation to learn how to set its environment variables.

Now the next time you start your production server, it automatically begins pushing trace data to Studio.

You can also push trace data from environments besides production, such as a staging or beta server. To keep this data separate from your production data, learn how to create variants of your graph.

These servers and their trace reporting mechanisms are not maintained by Apollo. Apollo does not provide official support for them.

You can set up a reporting agent in your GraphQL server to push metrics to Apollo Studio. The agent is responsible for:

Apollo Server defines its agent for performing these tasks in the usage reporting plugin.

If you're interested in collaborating with Apollo on creating a dedicated integration for your GraphQL server, please get in touch with us at support@apollographql.com.

Apollo Studio's reporting endpoint accepts batches of traces that are encoded in protocol buffer format. Each trace corresponds to the execution of a single GraphQL operation, including a breakdown of the timing and error information for each field that's resolved as part of the operation.

The schema for this protocol buffer is defined as the Report message in the TypeScript reference implementation.

This document describes how to create a report whose tracesPerQuery objects consist solely of a list of detailed execution traces in the trace array. Apollo Studio now allows your server to describe usage as a mix of detailed execution traces and pre-aggregated statistics (released in Apollo Server 2.24), which leads to much more efficient reports. This document does not yet describe how to generate these statistics. It also does not describe how to support the "referencing operations" feature of the Fields page.

As a starting point, we recommend implementing an extension to the GraphQL execution that creates a report with a single trace, as defined in the Trace message of the protobuf schema. Then, you can batch multiple traces into a single report. We recommend sending batches approximately every 20 seconds, and limiting each batch to a reasonable size (~4MB).

An example of a FullTracesReport message, represented as JSON, is provided below.

Many server runtimes already support emitting tracing information as a GraphQL extension. Such extensions are available for Node, Ruby, Scala, Java, Elixir, and .NET. If you're working on adding metrics reporting functionality for one of these languages, reading through that tracing instrumentation is a good place to start. For other languages, we recommend consulting the Apollo Server usage reporting plugin.

For Apollo Studio to correctly group GraphQL queries, your reporting agent should define a function to generate a query signature for each distinct query. This can be challenging, because two structurally different queries can be functionally equivalent. For instance, all of the following queries request the same information:

It's important to decide how to group such queries when tracking metrics. The TypeScript reference implementation does the following to every query before generating its signature to better group functionally equivalent operations:

Sending metrics to the reporting endpoint

After your GraphQL server prepares a batch of traces, it should send them to the Studio reporting endpoint at the following URL:

Each batch should be sent as an HTTP POST request. The body of the request can be one of the following:

To authenticate with Studio, each request must include either:

Only graph-level API keys (starting with the prefix service:) are supported.

The request can also optionally include a Content-Type header with value application/protobuf, but this is not required.

⚠️ The reporting endpoint rejects reports that are older than 50 minutes. If you see an error like Rejecting report from service <your service> with skewed timestamp, make sure your traces are current and that your timestamp calculations are accurate.

For a reference implementation, see the sendReport() function in the TypeScript reference agent.

We recommend implementing retries with backoff when you encounter 5xx responses or networking errors when communicating with the reporting endpoint. Additionally, implement a shutdown hook to make sure you push all pending reports before your server initiates a healthy shutdown.

The reference TypeScript implementation includes several features that you might want to include in your implementation. All of these features are implemented in the usage reporting plugin itself, and are documented the plugin's API reference.

For example, you can restrict which information is sent to Studio, particularly to avoid reporting personal data. Because personal data most commonly appears in variables and headers, the TypeScript agent offers options to sendVariablesValues and sendHeaders.

The FullTracesReport message must be provided to the Studio reporting endpoint in protocol buffer format, as described in Tracing format. This example is shown in JSON format to illustrate the structure of the message.