As you might have noticed, the object returned from the LaunchListQuery is a LaunchConnection. This object has a list of launches, a pagination cursor, and a boolean to indicate whether more launches exist.

When using a cursor-based pagination system, it's important to remember that the cursor gives you a place where you can get all results after a certain spot, regardless of whether more items have been added in the interim.

In the previous section, you hardcoded the SMALL size argument directly in the GraphQL query, but you can also define arguments programmatically using variables. You will use them here to implement pagination.

In LaunchList.graphql, add a cursor variable. In GraphQL, variables are prefixed with the dollar sign, like so:

You can experiment with GraphQL variables in Sandbox Explorer by using the pane under the main body of the operation named Variables. If you omit the $cursor variable, the server returns data starting from the beginning: 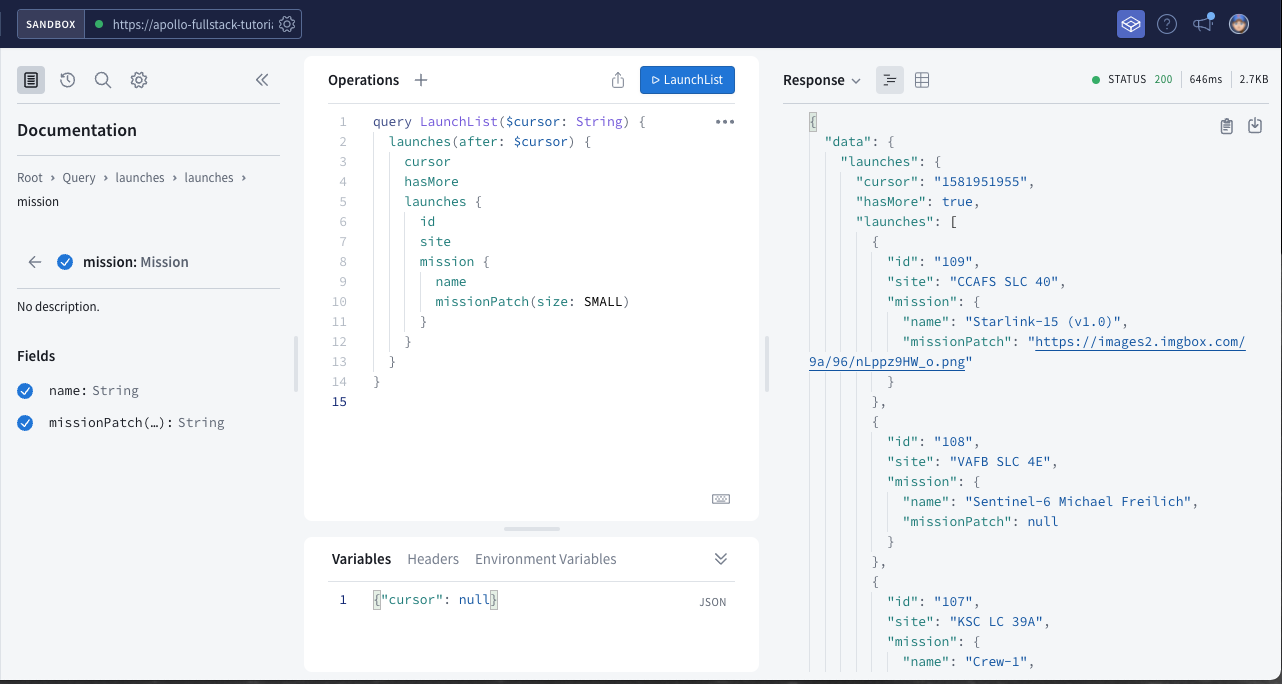 Get a callback when more data is needed

Add the following to LaunchListAdapter.kt to get a callback when the end of the list is reached:

Note that you can add some look-ahead and trigger the callback before the end of list is reached if you want to minimize the wait time and trigger a new network requests a few items before the end of list is reached. This is a basic implementation of a paging adapter - in a real project you would probably use something like the Jetpack Paging library.

Connect to the callback

In LaunchListFragment.kt's onViewCreated between the super call and your existing lifecyleScope code, register this callback and link it to a coroutine Channel:

Channels are useful for communicating between coroutines. In this case, the channel does not transfer any real data besides the information that the end of list has been reached. For this it uses the Unit data type. Every time a Unit object is read from the channel, it means the adapter might need more data.

Also note that the channel is CONFLATED. A conflated channel will drop items if the consumer cannot proceed through them fast enough. In this case, if the user scrolls up and down while a query is still in flight, you don't want to buffer these requests to replay them later, so it's fine to drop them.

Start a coroutine and execute the query. Replace the previous single query in your call to the lifecycleScope with the paginated version:

Coroutines help you write pagination as if it were a procedural while loop. Notice how the cursor is updated at each iteration and the loop is terminated if there is no data to get from the backend anymore (hasMore == false)

Note that we wrap the cursor in an Optional: this is because this parameter can be omitted in the query.

Click Run. You can now see all SpaceX launches back to their first FalconSat from Kwajalein Atoll!

Next, you'll add a details view that will allow you to book a seat on a launch.

Edit on GitHub
Previous
6. Add more info to the list
Next
8. Add a details view