You can use Rover in any CI/CD environment that uses a Rover-supported operating system (Linux, MacOS, or Windows). Most commonly, this is to run schema checks with rover graph check or rover subgraph check.

Rover's installation is similar to many other CLI tools, but the recommended method varies depending on which provider you're using. We've included instructions for some of the most common CI/CD providers:

If you're using Rover with a CI/CD provider not listed here, we'd love for you to share the steps by opening an issue or pull request!

Normally when installing, Rover adds the path of its executable to your $PATH. However, CircleCI doesn't use the $PATH variable between run steps. This means that if you install Rover and try to run it in the next step, you get a command not found: rover error.

To fix this, you can modify the $PATH and append it to $BASH_ENV. $BASH_ENV is executed at the beginning of each step, enabling any changes to be maintained across steps. You can add Rover to your $PATH using $BASH_ENV like this:

After you install Rover and modify the $BASH_ENV as shown, Rover should work like normal.

Important: Because the rover config auth command is interactive, you need to authenticate using an environment variable in your project settings.

If you use GitHub Actions to automatically run schema checks on every pull request (as shown below), you can install the Apollo Studio GitHub app to provide links to the results of those checks alongside your other pull request checks: 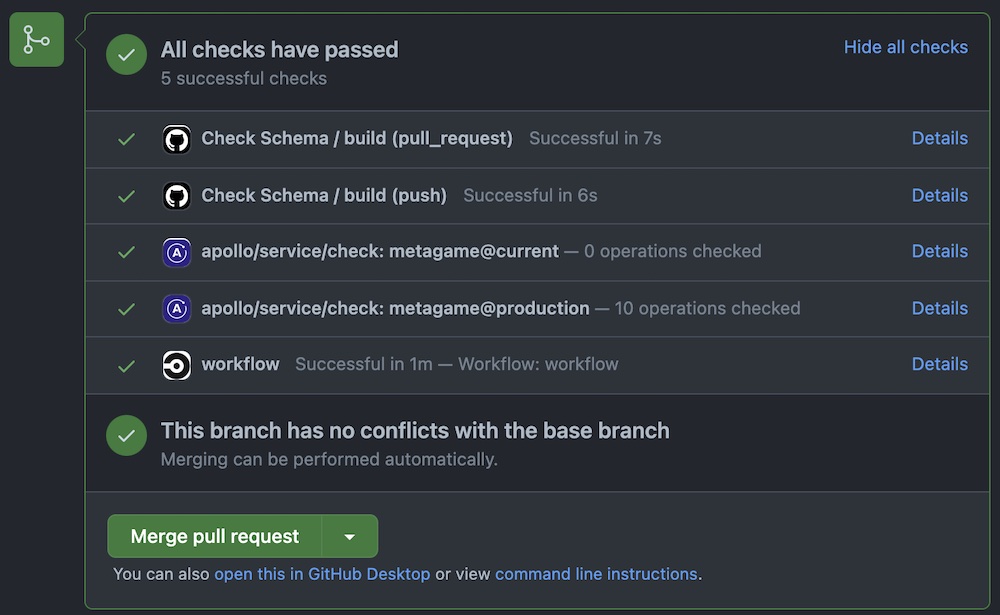 For these entries to display correctly, you need to make sure Rover associates the schema check execution with the pull request's HEAD commit, as opposed to the merge commit that GitHub adds. To guarantee this, set the APOLLO_VCS_COMMIT environment variable in your action's configuration, like so:

Normally when installing, Rover adds the path of its executable to your $PATH. However, GitHub Actions doesn't use the $PATH variable between run steps. This means that if you install Rover and try to run it in the next step, you get a command not found: rover error.

Important: Because the rover config auth command is interactive, you need to authenticate using an environment variable in your project settings.

GitHub actions uses project environments to set up secret environment variables. In your action, you choose a build.environment by name and set build.env variables using the saved secrets.

The following is a full example script, showing how to choose an apollo environment and set an APOLLO_KEY variable:

The following is a full example configuration for Bitbucket Pipelines. It shows how to:

To set up Rover for use with Jenkins, first consider which type of Jenkins agent you'll use in your pipelines. The samples below demonstrate a golang pipeline that uses Docker, but you can modify them to meet your specific needs.

Distributed builds via the node agent

If you're running a distributed build system using the node agent type, make sure that Rover is installed on all machines either as part of a baseline image or via a setup script. Also make sure it's available globally via the PATH environment variable.

If you're using Rover with a Docker-enabled pipeline, note the following additional considerations:

Normally when installing, Rover adds the path of its executable to your $PATH. However, Jenkins doesn't persist the $PATH variable between runs of sh steps, because each sh block runs as its own process. This means that if you install Rover and try to run it in the next step, you get a command not found: rover error. This is functionally similar to the CircleCI note, but the resolution is different.

To avoid this issue, do one of the following:

If you run into permissions issues within Docker, you can resolve many of them by creating a user to run the install and build processes. The example Dockerfile below shows how to accomplish this with a specific Docker image for your Jenkins build pipeline:

After you've installed Rover appropriately, you can execute the rover command within a sh step, as shown in the example configuration below. Because rover outputs logs via stderr and emits proper status codes, it generates build errors if the rover subgraph check command fails.

We recommend passing arguments to rover commands via environment variables. This enables you to reuse large portions of your pipeline, making it faster to onboard new subgraphs without rewriting code.

Additionally, we strongly recommend passing in the APOLLO_KEY by using a Jenkins credential and referencing it using credentials(key_name) within your jenkinsfile. An example of this is below.

If you're running in a Node.js workflow, it might be easier to use the NPM distribution of Rover. This way, you don't need to adjust the PATH at all to run Rover, and it might fit better into your existing workflow.

You can use Rover by adding it to your package.json dependencies using these instructions and then execute it using npm scripts, similar to other workflows you might already have. If you don't want to install Rover as a dependency, you can run it with npx by using the -p flag:

Note: Only run this command with the --background flag if you have the Apollo Studio GitHub integration enabled on your repository.

Since most commands require you be authenticated, see the above sections for instructions on how to add environment variables for your CI/CD provider.