When you're viewing your graph's operation metrics, Apollo Studio groups together operations based on the exact set of fields they include, not based on operation names. This means that operations with the same name but different sets of fields are displayed separately: 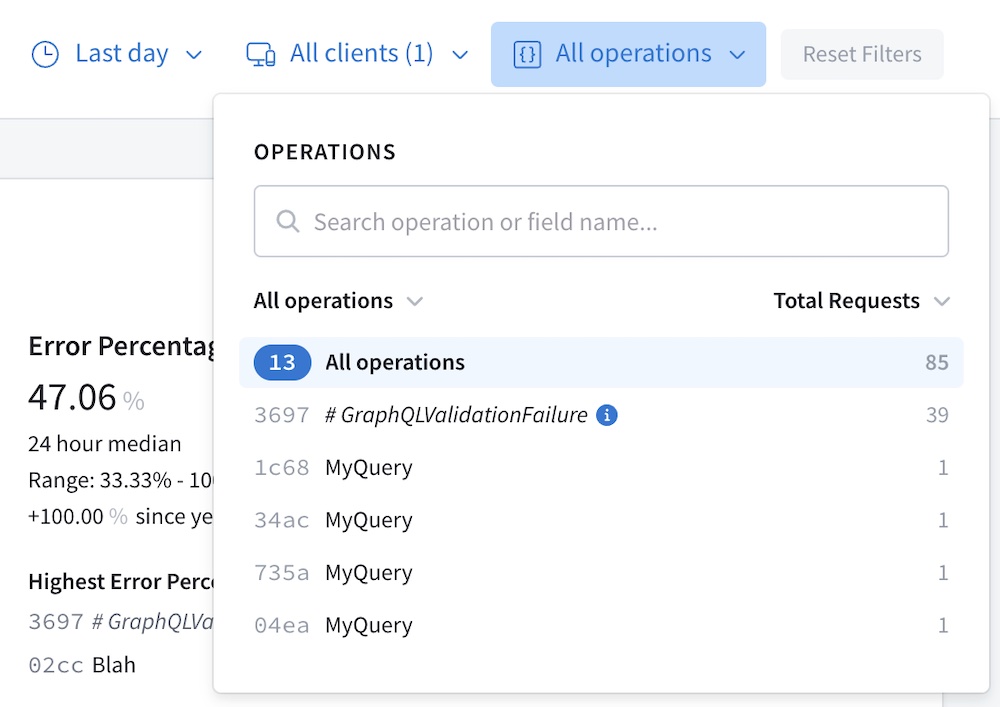 To help GraphOS identify functionally identical operations, your router generates the signature for each operation it reports to Studio. This signature is a normalized representation for an operation with deterministic field order, whitespace, and values for in-line argument values.

Why do we need an operation signature?

Despite some cosmetic differences (including comments), all of these operations execute identically on a particular GraphQL server. Therefore, Studio should group them when displaying performance information.

Helpfully, Apollo libraries use a signature algorithm to generate the exact same operation signature for all of these operations, which means Studio does group them.

⚠️ This algorithm is subject to change. This article describes the signature algorithm as of the release of Apollo Server 3.6.1. It is provided here for informational purposes, not as a canonical specification.

Feel free to jump to an example or view the source.

The signature algorithm performs the following modifications on an operation to generate its signature:

If an operation includes any in-line argument values, those values are transformed according to their type:

Most unnecessary characters in the operation definition (including comments and redundant whitespace) are removed.

If the operation document includes multiple operations, then operations besides the executed operation are removed.

Whenever the names of two sorted items are identical, the algorithm preserves the original order of those items relative to each other.

For a given object or fragment's fields, field selections are sorted in the following order:

Within each of these, sorting is alphanumeric by field name or fragment name.

All field aliases are removed. If an operation includes three instances of the same field with different aliases, then that field is listed in the signature three times with its non-aliased name.

If a single field accepts multiple arguments, those arguments are sorted alphanumerically by name.

The signature algorithm generates the following signature for this operation:

The signature algorithm's primary purpose is to group together operations that differ only cosmetically (in terms of whitespace, field order, aliases, and so on). As an additional effect, the algorithm does remove most in-line argument values, which in theory helps maintain data privacy.

However, you should not rely on this! Ideally, your sensitive data should never reach Apollo Studio in the first place. Whenever possible, use GraphQL variables instead of in-line values for arguments. This helps you control exactly which values are reported to Apollo. For details, see Apollo Studio data privacy and compliance.

To view operation signature hashes in your own logging tools, you can create an Apollo Server plugin that accesses hash values from the shared context. The relevant values are available in the queryHash and operationName properties: