Follow the steps below to add Apollo iOS to your app:

Before installing Apollo iOS, make sure you're using the latest version of Xcode. You can update Xcode via the Mac App Store.

You can install Apollo.framework into your project using any of the three major Cocoa ecosystem package managers: Swift Package Manager, CocoaPods, or Carthage.

3. Add a schema file to your target directory

For Apollo iOS to generate models for your GraphQL operations, you need a local copy of your GraphQL server's schema. To acquire this schema, see Downloading a schema.

Note: You can put the schema file in a different location, but if you do, you need to modify all relative paths to the file shown in future steps.

Check out the xcode-apollo repository and follow its installation guide.

Apollo iOS generates code from GraphQL queries and mutations defined in .graphql files in your target. As a useful convention, you can define each [operation].graphql file alongside whichever [operation].swift file uses the corresponding operation.

If you have the Xcode add-ons installed, you can use the Xcode companion view to show a .swift file and its corresponding .graphql file side by side.

Note: If you don't have any .graphql files in your build tree yet, create one that contains a basic valid operation. If you don't, the code generation build step generates the error No operations or fragments found to generate code for.

Apollo iOS code generation uses your .graphql files to generate API code that helps you execute all forms of GraphQL operations, as well as parse and cache operation responses. To run code generation as part of the Xcode build process, you need to create a build step that runs before "Compile Sources" to invoke a wrapper script.

The wrapper script calls through to the included binaries and files that constitute the apollo command-line interface. This helps ensure that you can use our tooling without having to worry about mismatched versioning between libraries.

📣 Check it out: Instead of writing the rest of this in Bash, try using our new Swift Scripting Library, now in Beta! It supports downloading a schema and generating code.

The location of this wrapper script depends on how you've integrated Apollo into your project, but these first steps are always the same:

If you're using Xcode 11 or higher, SPM checks out the appropriate build script along with the rest of the files when it checks out the repo. Add the following to your Run Script build phase:

Note: If you try to use this with command line SPM, when you regenerate your xcodeproj this build script will get wiped out. We strongly recommend using Xcode 11's built-in SPM handling instead of the command line because of this.

Our CocoaPods install includes the code-generation scripts and binaries of the apollo CLI client as files which will not be added to the framework, but which you can still call from a Run Script Build Phase. Add the following to the Run Script:

The scripts and binaries that you need to generate code are included in the Carthage/Checkouts folder. If this folder is not checked into version control, all developers on a team (and your CI machine) need to run carthage checkout when changes are made to the version to ensure they have the correct underlying binaries and scripts.

Team members can then use this build script:

At this point, you can try building your target in Xcode. This verifies that the code generation build step can correctly locate your schema file.

No operations or fragments found to generate code for.

You haven't defined at least one .graphql file with a valid operation in your build tree.

If you need to validate the structure of a GraphQL operation, you can test it against your GraphQL server using Apollo Sandbox.

7. Add the generated API file to your target

Drag the generated API.swift file to your target.

Make sure to uncheck the "Copy Files If Needed" checkbox, because it should already be in your project's folder system. Then, make sure you've checked all the Targets the API file needs to be included in.

Installation complete! You can now start executing GraphQL operations in your app. To learn how, next check out Creating a client and Fetching queries.

You can also continue reading below for some advanced codegen tips.

After you get up and running, here are a few improvements you can make to your codegen process.

Set up input and output files in your build phase

If you're using a tool like Interface Builder or SwiftUI to talk to a module with its own code generation build step, this is helpful to prevent the API.swift file from causing an auto-regeneration loop.

For example, if you're using something like this to run your code generation for a target called YourTarget: 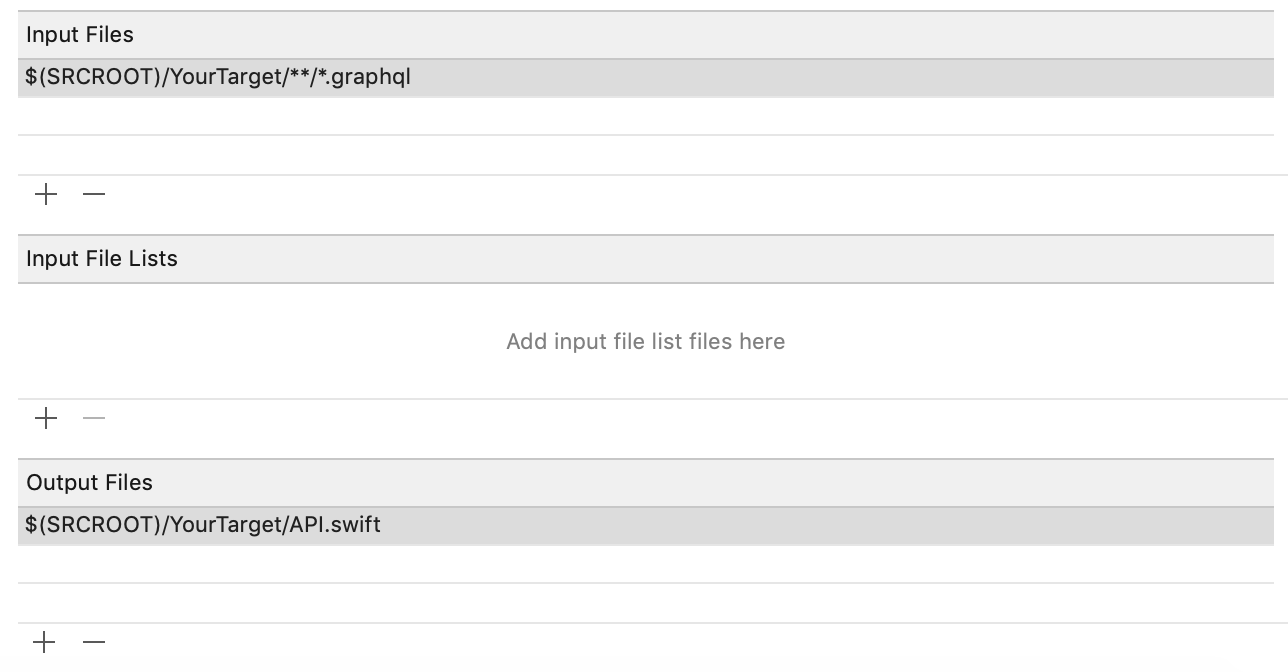 This should prevent automatic rebuild cycles if none of the InputFiles are changed. The script will still run if you explicitly build and run.

There's an open issue to auto-generate input and output file lists which will be addressed as part of Apollo iOS 1.0, but this will help until that's done.

Write to a temporary file

If for some reason the input/output file setup above doesn't work for you, you can also decide to first write the file to a temporary location, and then compare this temporary file to the current one. Then, only when the files differ you move the temporary file into place.

For a target called YourTarget, the script could look something like this:

Generate multiple files in a folder instead of one large file

Instead of passing a single API.swift file, you can pass a (pre-existing) relative folder path such as API as the final parameter. This causes the codegen to create individual files and place them in that folder.

With small sets of graphql files this is usually unnecessary, but with large sets that can cause API.swift to be huge. Dividing it up like this can help significantly reduce compilation time.