In this section, you will use subscriptions to get notified whenever someone books a flight 🚀! Subscriptions allow you to be notified in real time whenever an event happens on your server. The fullstack backend supports subscriptions based on WebSockets.

Open your Sandbox back up, click on the Schema tab at the far left. In addition to queries and mutations, you will see a third type of operations, subscriptions. Click on subscriptions to see the tripsBooked subscription: 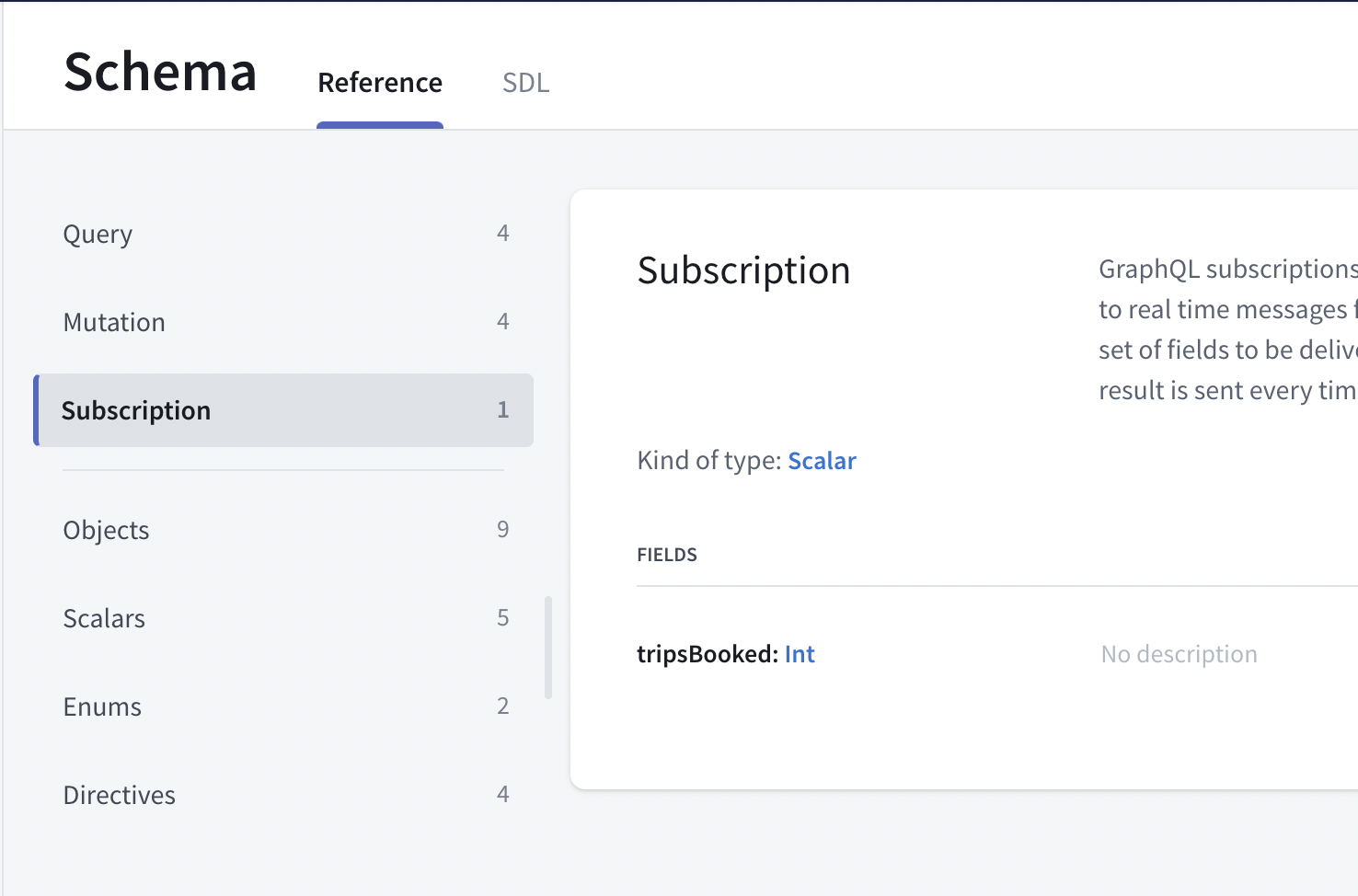 This subscription doesn't take any argument and returns a single scalar named tripsBooked. Since you can book multiple trips at once, tripsBooked is an Int. It will contain the number of trips booked at once or -1 if a trip has been cancelled.

Again, rename your subscription so it's easier to find:

Click the Submit Operation button, and your subscription will start listening to events. You can tell it's up and running because a panel will pop up at the lower left where subscription data will come in: 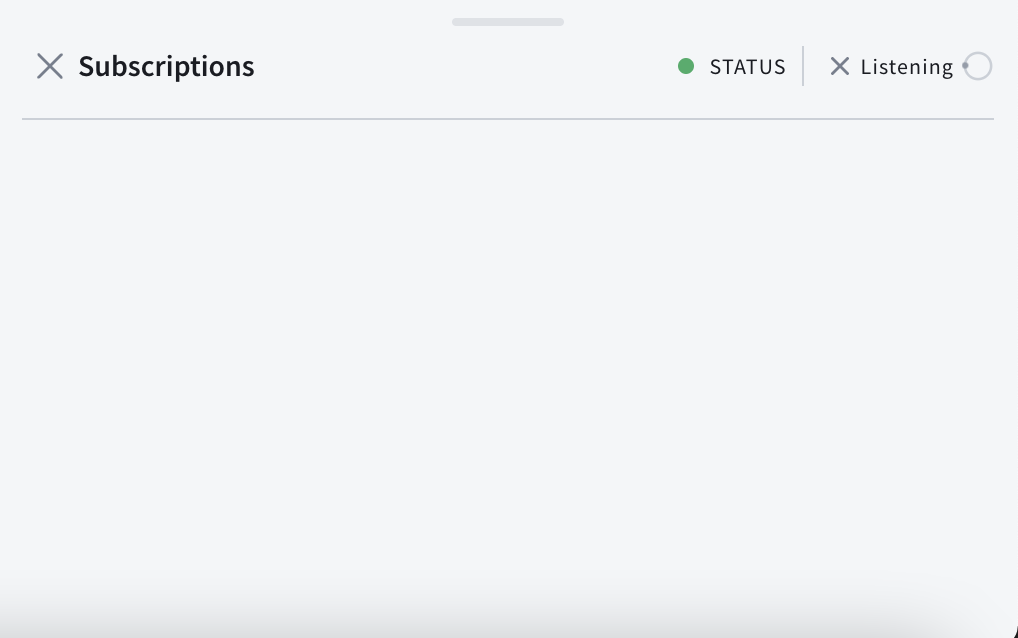 Open a new tab in Explorer. In this new tab, add code to book a trip like on step 8, but with a hard-coded ID:

Do not forget to include the authentication header. At the bottom of the Sandbox Explorer pane where you add operations, there's a Headers section: 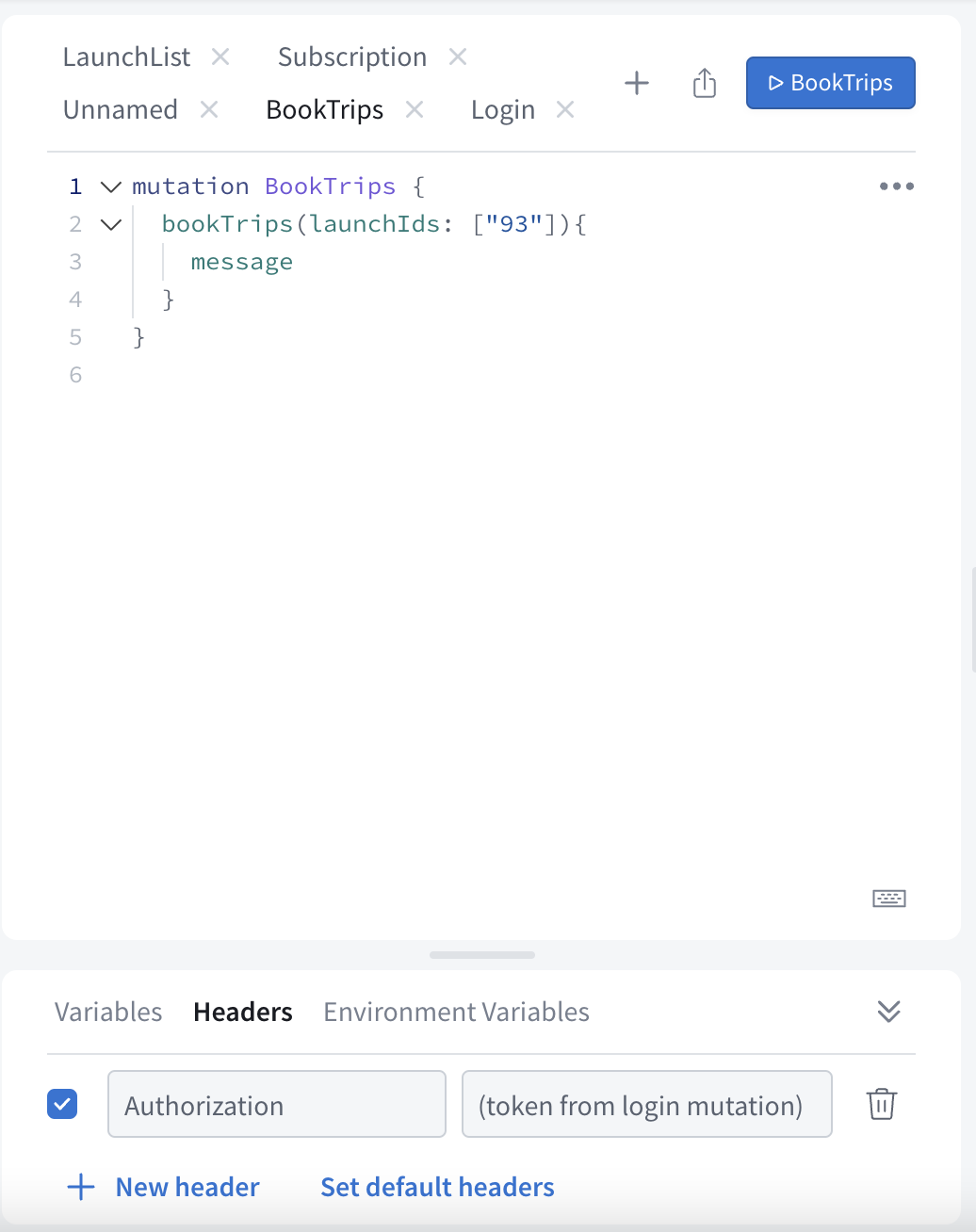 Click the Submit Operation button. If everything went well, you just booked a trip! At the top of the right panel, you'll see the success JSON for your your BookTrip mutation, and below it, updated JSON for the TripsBooked subscription: 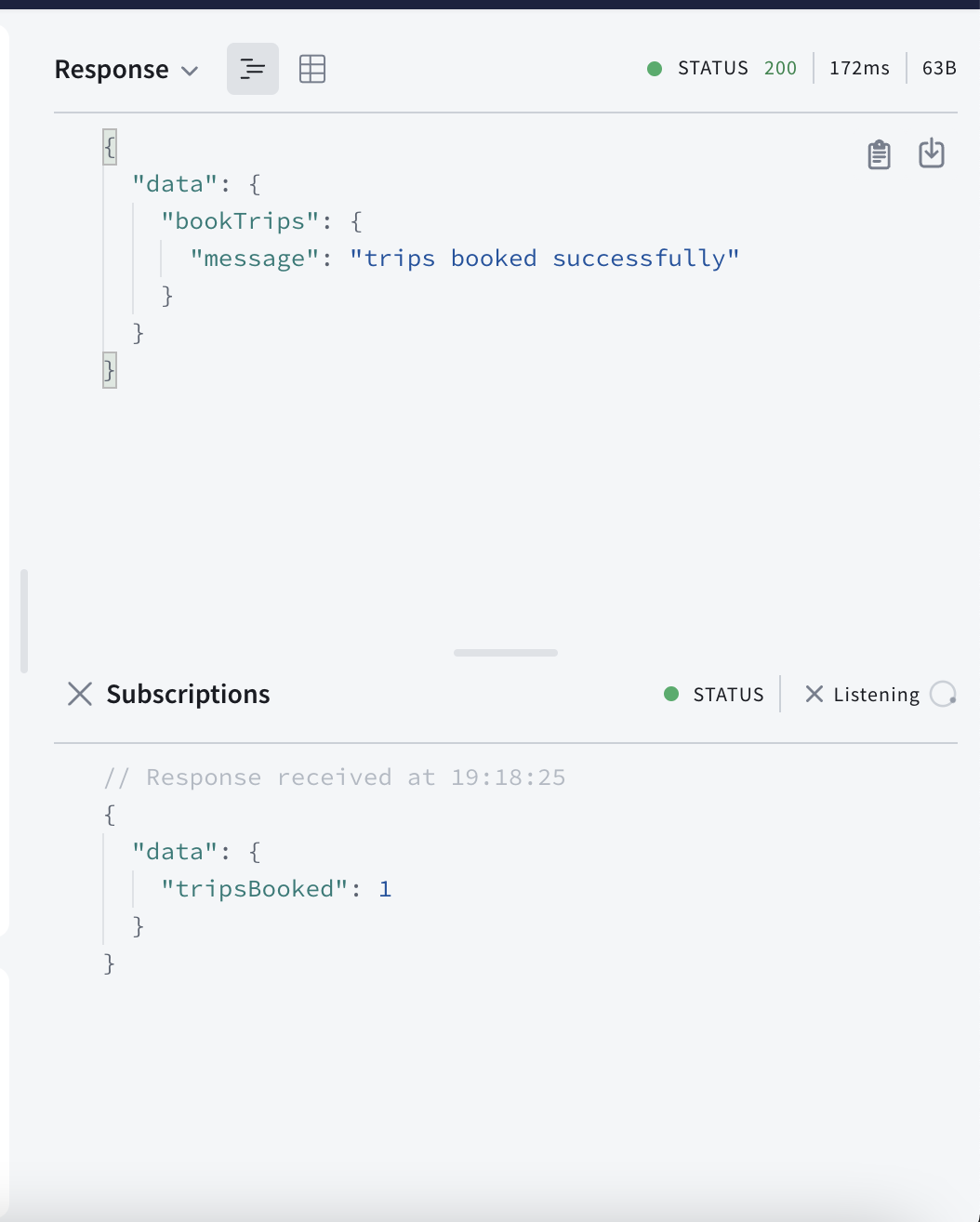 Continue booking and/or canceling trips, you will see events coming in the subscription panel in real time. After some time, the server might close the connection and you'll have to restart your subscription to keep receiving events.

Add the subscription to the project

Now that your subscription is working, add it to your project. Create an empty file named TripsBooked.graphql next to your other GraphQL files and paste the contents of the subscription. The process is similar to what you've already done for queries and mutations:

Build your project, and the subscription will be picked up and added to your API.swift file.

Configure your ApolloClient to use subscriptions

This tutorial uses the graphql-ws protocol, implemented by the subscriptions-transport-ws library. That library is no longer actively maintained. We recommend using the graphql-ws library instead, which implements its own WebSocket subprotocol, graphql-transport-ws. Note that the two libraries do not use the same WebSocket subprotocol and you need to ensure that your servers, clients, and tools use the same library and subprotocol. For more information and examples, see GraphQL over WebSocket protocols.

In Network.swift, you'll need to set up a transport which supports subscriptions in addition to general network usage. In practice, this means adding a WebSocketTransport which will allow real-time communication with your server.

First, at the top of the file, add an import for the ApolloWebSocket framework to get access to the classes you'll need:

Next, in the lazy declaration of the apollo variable, immediately after transport is declared, set up what you need to add subscription support to your client:

Now, you're ready to actually use your subscription!

Display a view when a trip is booked/cancelled

In LaunchesViewController, add a new variable just below activeRequest to hang on to a reference to your subscription so it doesn't get hammered by ARC as soon as it goes out of scope:

Next, just above the code for handling Segues, add code for starting and handling the result of a subscription:

Finally, add a line to viewDidLoad which actually starts the subscription:

Build and run your app and go back to Sandbox Explorer, and select the tab where you set up the BookTrip mutation. Book a new trip while your app is open, you'll see a log print out:

Cancel that same trip, and you'll see another log:

Now, let's display that information in a view! Replace the print statement in handleTripsBooked with code to use the included NotificationView to show a brief alert at the bottom of the screen with information about a trip being booked or cancelled:

Build and run the application to your simulator, then use Studio to send bookings and cancellations again, and your iOS app should see some shiny new notifications pop up: 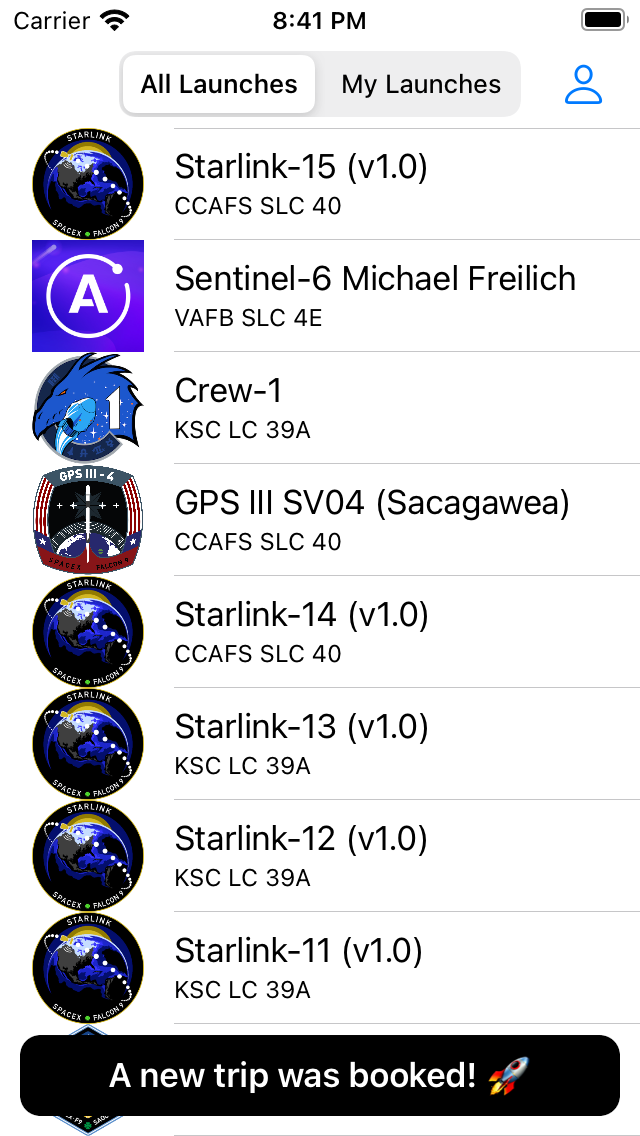 And you've done it! You've completed the tutorial.

There are way more things you can do with the Apollo iOS SDK, and the rest of this documentation includes info on more advanced topics like:

Feel free to ask questions by either opening an issue on our GitHub repo, or joining the community.

And if you want dig more and see GraphQL in real-world apps, you can take a look at these open source projects using Apollo iOS: