Apollo Client for iOS enables you to use Swift scripting to perform certain operations that otherwise require the command line.

This document guides you through setting up a Swift Package Manager executable project using our template, and then using that project to:

Apollo's code generation requires both of the following to run:

Each operation you define can be one of the following:

Code generation takes your operations and compares them to the schema to confirm that they're valid. If an operation isn't valid, the whole process errors out. If all operations are valid, codegen generates Swift code that gives you end-to-end type safety for each operation.

We've created a template of a Swift Package Manager Executable to speed things along.

This project is provided as a template for an executable rather than a compiled executable to allow you to make changes to the executable relevant to your setup. This allows you to customize while still using Swift as much as possible and bash as little as possible, to preserve both type safety and readability.

You can download the current version of the template from this repo: https://github.com/apollographql/iOSCodegenTemplate

When you unzip the downloaded repo, you'll see that there's a folder called ApolloCodgen.

If you're using the default target structure for an Xcode project, your project's file structure will look essentially like this in Finder:

Drag the ApolloCodegen folder in at the same level as your other targets (in Finder, not in Xcode):

Double-click Package.swift in the ApolloCodegen folder to open the executable's package in Xcode.

Note that these instructions are updated along with newer versions of the library - if you're seeing something that doesn't compile, please check that you're on the most recent version of the SDK both in your app and in your Codegen project.

A Tour Of The Template Project

This section will walk you through the already-set up code in the template project. There are two files: main.swift and FileStructure.swift.

This structure exists to simplify accessing your local filesystem without needing to pass any URLs through as environment variables.

It uses FileFinder to find the directory that the file containing the code lives in, and then you can use either standard FileManager APIs or .apollo extension methods provided by ApolloCodegenLib to find parent or child files and folders.

There are two major pieces of information it grabs automatically, assuming you have a filesystem set up as in the example above:

From sourceRoot you should be able to use FileManager APIs or their .apollo extensions to navigate anywhere in your project's file tree.

This object uses the Swift Argument Parser to create an outer root command which can be run either from the command line if a binary is exported, or run directly by using swift run (recommended).

There are sub-commands to run specific tasks - these are most often what you'll want to focus on, and where you'll need to make changes appropriate to your project's name and structure.

This command will download a GraphQL schema. There are two pieces you definitely need to fill in:

You can also use options provided by the ApolloSchemaDownloadConfiguration object to further configure how and where you want to download your schema.

You will need to replace one placeholder: The location of your target's root folder.

Running as a script

To run the script using the command line, cd into the ApolloCodegen directory and run the following command:

This will build and run the executable, and then run the specified subcommand. The first build may take a minute since it will need to check out dependencies, but the Swift build system's caching will prevent any steps that haven't had changes (including dependency fetching) from re-executing.

If you don't provide a subcommand, a list of available subcommands will be printed.

Update the downloadSchema command to have the correct download method and download path within the Swift file. Then, from the command line, run:

If you're using the template code and following the sample project structure, the schema should download here:

Next, now that you have a schema, you need a GraphQL file with an operation in order to generate code.

Adding a .graphql file with an operation

If you're not familiar with creating an operation in graphQL, please check out the portion of our tutorial on executing your first query. You can stop after the section about adding your query to Xcode.

Make sure you've added the operation file to the project files, ideally at or above the level of the schema.graphqls (Otherwise, you'll need to manually pass the URL of your operation file to your code generation step):

Here, for example, is what this looks like in a file for one of the queries in our tutorial application: 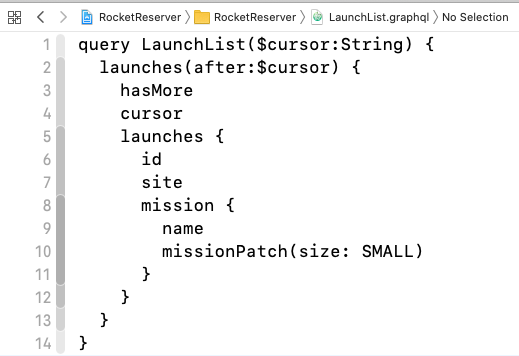 Note: You do not need to add this file to your target in Xcode. Only the generated Swift code needs to be included in your target for it to work.

Codegen should be set up to run from your main project when you build - this will allow any changes you've made to your graphQL files to be picked up and the code to be regenerated.

This is best achieved with a Run Script Build Phase.

Now, every time you build your project, this script gets called. Because Swift knows not to recompile everything unless something's changed, it should not have a significant impact on your build time.

If you encounter errors around SecTaskLoadEntitlements that result in an immediate exit of the script instead of showing the permission prompt, verify that all the folders you're looking for exist at the correct path. This error is often caused by a typo.