To get more information to show on the detail page, you have a couple of options:

The first option can seem easier if there isn't a substantial difference in size between what you're requesting for the list versus the detail page.

However, remember that one of the advantages of GraphQL is that you can query for exactly the data you need to display on a page. If you're not going to be displaying additional information, you can save bandwidth, execution time, and battery life by not asking for data until you need it.

This is especially true when you have a much larger query for your detail view than for your list view. Passing the identifier and then fetching based on that is considered a best practice. Even though the amount of data in this case doesn't differ greatly, you'll build out a query to help fetch details based on the ID so you'll know how to do it in the future.

Create a new empty file and name it LaunchDetails.graphql. In this file, you'll add the details you want to display in the detail view. First, you'll want to go back to your Sandbox and make sure that your query works!

In the Explorer tab, start by clicking the "New Tab" button in the middle operations section:

A new tab will be added with nothing in it:

In the left-hand column, click the word "Query" under "Documentation" to be brought to a list of possible queries: 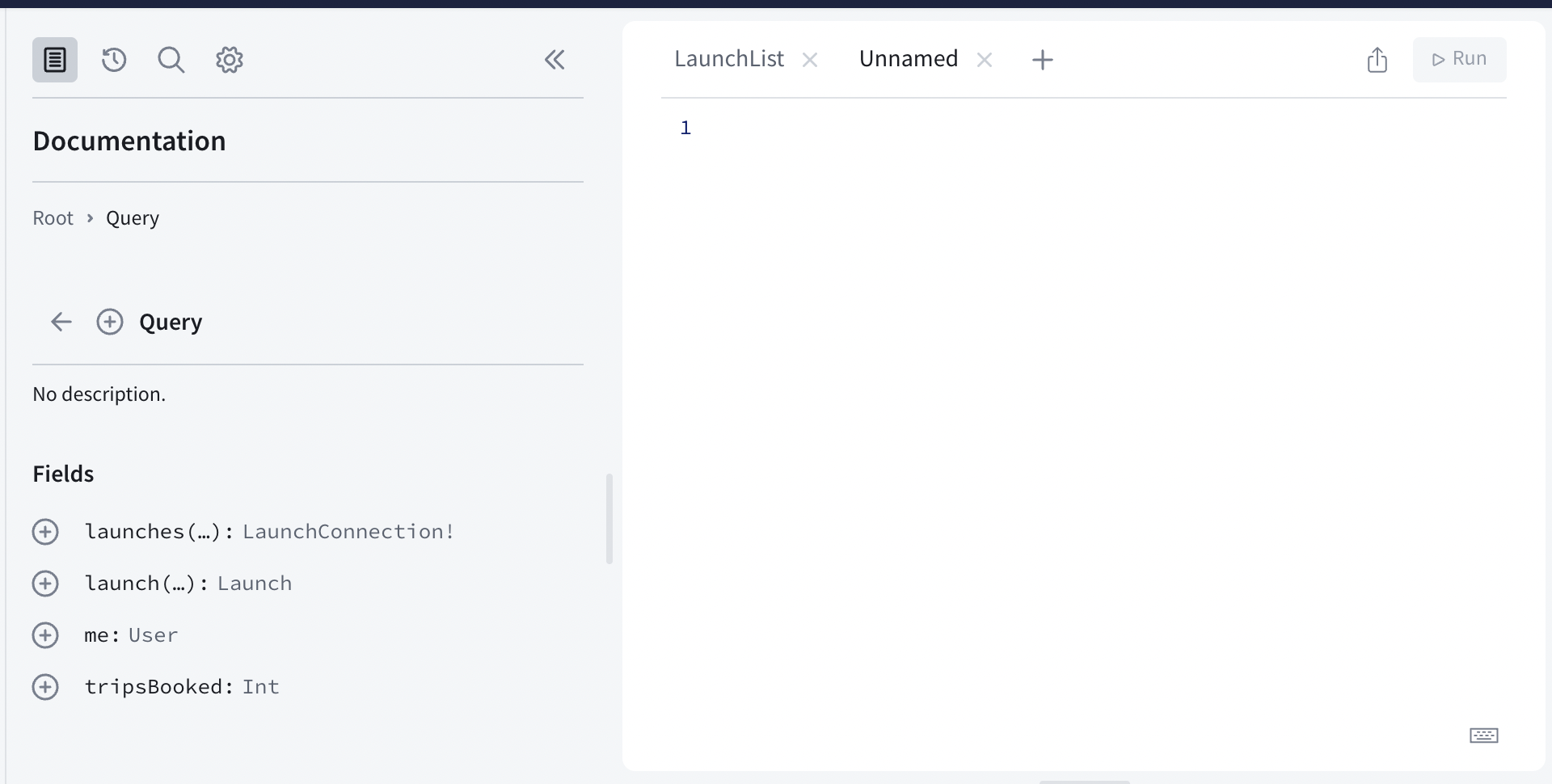 Select the launch query by clicking the button next to it. Sandbox Explorer will automatically set up the query for you to use: 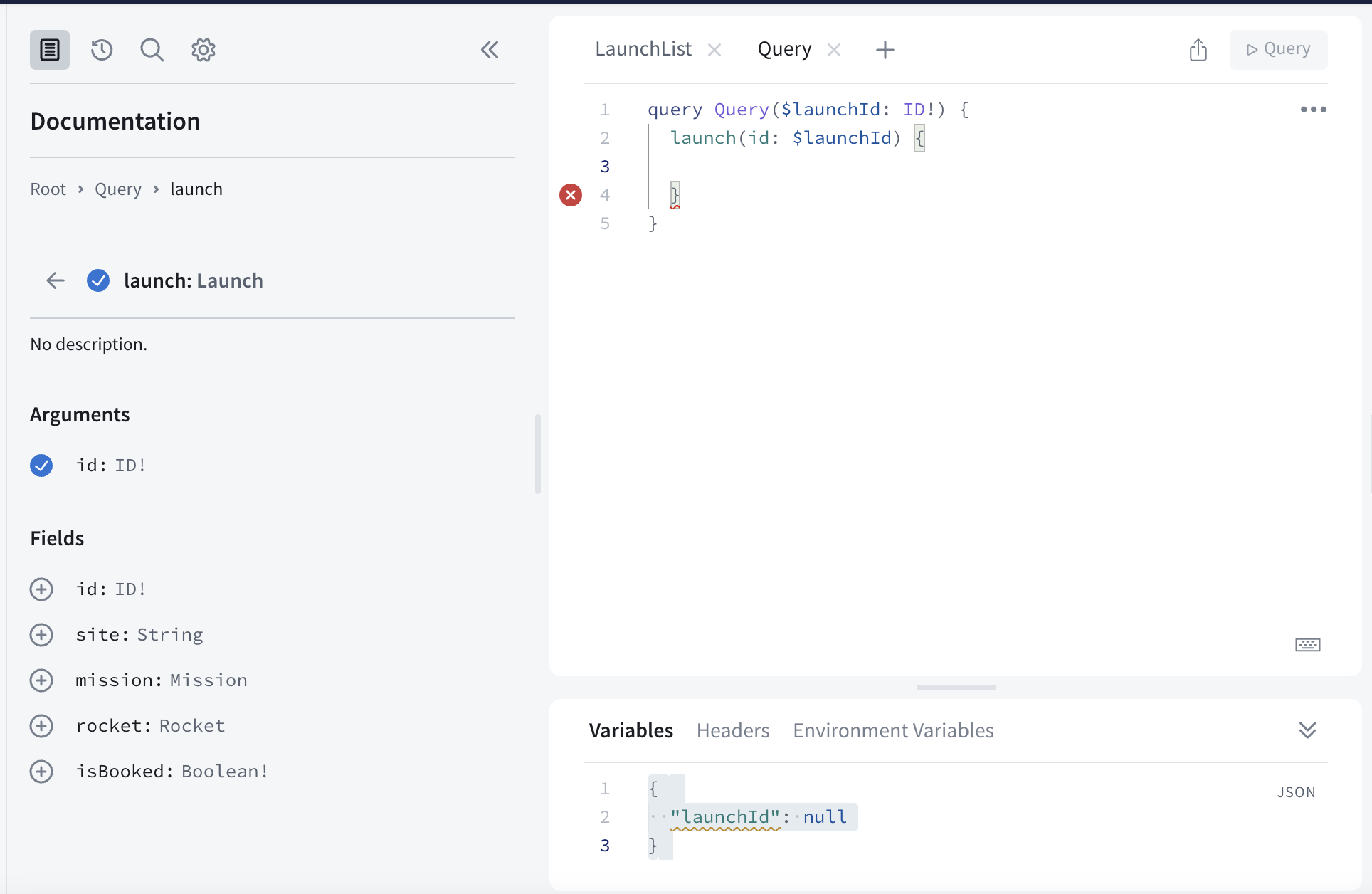 First, change the name of the operation from "Query" to "LaunchDetails" - that will then reflect in the tab name and make it easier to tell which query you're working with:

Note: GraphQL's assumptions about nullability are different from Swift's. In Swift, if you don't annotate a property's type with either a question mark or an exclamation point, that property is non-nullable.

In GraphQL, if you don't annotate a field's type with an exclamation point, that field is considered nullable. This is because GraphQL fields are nullable by default.

Keep this difference in mind when you switch between editing Swift and GraphQL files.

Now, switch back to Sandbox Explorer. Start by using the checkboxes or typing to add the properties you're already requesting in the LaunchList query. One difference: Use LARGE for the mission patch size since the patch will be displayed in a much larger ImageView:

Next, look in the left sidebar to see what other fields are available. Selecting rocket will add a set of brackets to request details about the rocket, and drill you into the rocket property, showing you the available fields on the Rocket type:

Click the buttons to check off name and type. Next, go back to Launch by clicking the back button next to the Rocket type in the left sidebar:

Finally, check off the isBooked property on the Launch. Your final query should look like this:

At the bottom of the Operations section, update the Variables section to pass in an ID for a launch. In this case, it needs to be a string that contains a number:

This tells Sandbox Explorer to fill in the value of the $launchId variable with the value "25" when it runs the query. Press the big play button, and you should get some results back for the launch with ID 25: 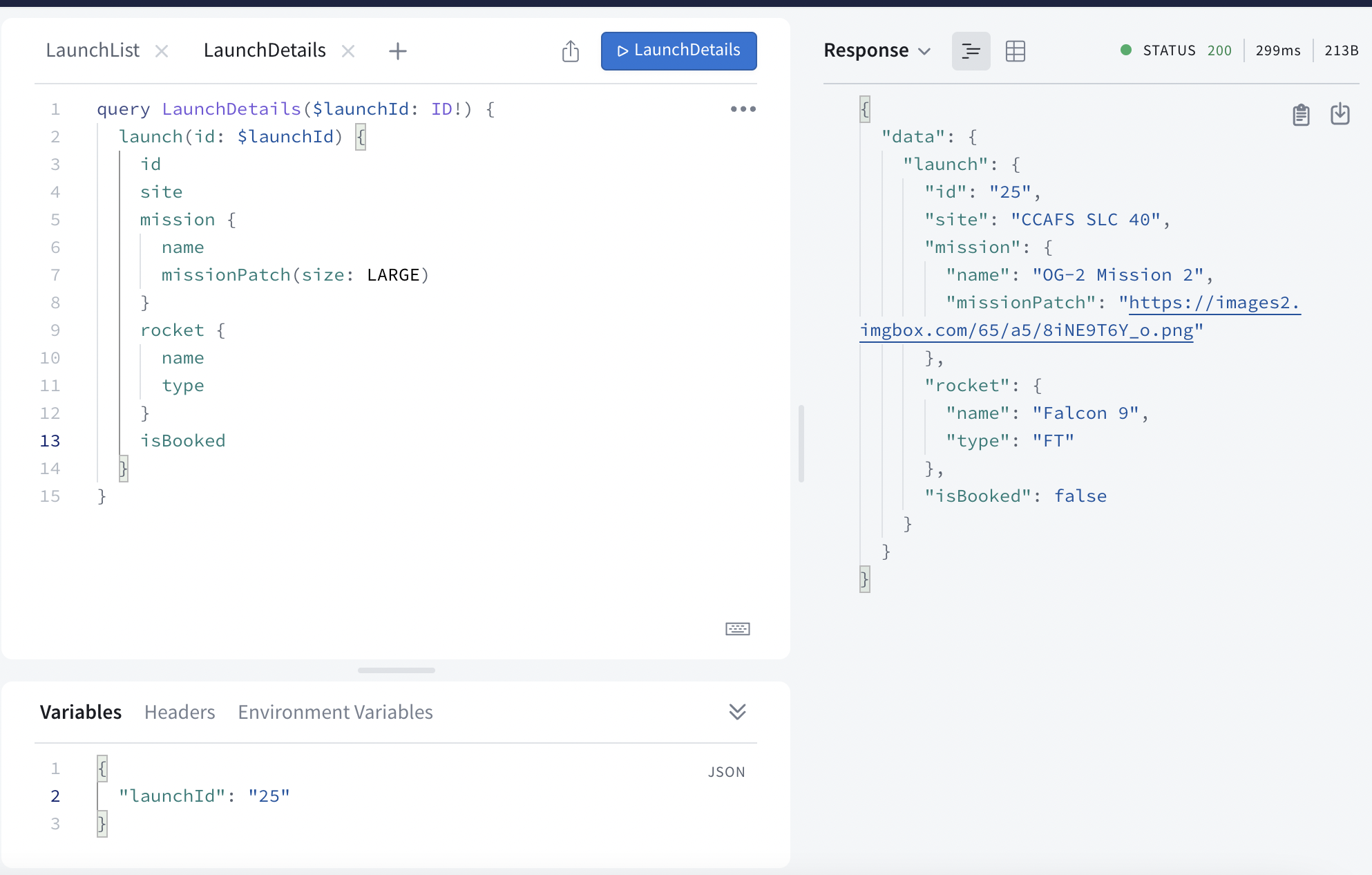 Now that you've confirmed it worked, copy the query (either by selecting all the text or using the "Copy Operation" option from the meatball menu as before) and paste it into your LaunchDetails.graphql file. Build the application so that codegen picks up this new file and generates a new query type for it.

Now that you know what you're planning to ask for, it's time to set up the UI for the detail screen. Go to DetailViewController.swift. First, add a place to hang on to the result of the query. Add the following property to the top of the class:

Next, update the viewDidLoad function to clear out anything from the storyboard before attempting to configure the view:

Delete the existing contents of configureView(). In their place, start by adding a check that we have something to display, and a place to display it:

Next, it's time to display all the information you've gotten from your GraphQL server. Remember that GraphQL properties are nullable by default, so you'll often need to provide handling for when a given property is nil.

Add the following code below the guard statement you just added:

Then, find the loadLaunchDetails() method. Replace the TODO with the following, which loads the details using the LaunchDetailsQuery you created earlier:

Finally, update the didSet for launchID to load the launch details if we don't already have them:

and add a didSet on the launch property to load the UI once the launch is actually loaded.

Build and run the application. When you tap into the detail screen, you should now see the full details:

You'll notice that many of the more recent launches have a rocket type of FT. If you load more launches until you get to the end of the list, you'll get to some rockets that have different rocket types:

You may have noticed that the detail view includes a Book Now! button, but there's no way to book a seat yet. To fix that, let's learn how to make changes to objects in your graph with mutations, including authentication.